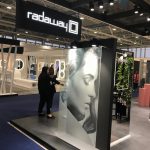 The attendance record during the exhibition of ceramic tiles and bathroom furnishment, which took place on September 23-27 in Bologna, Italy, was broken. Within 5 days of the show, over 112,000 visitors had the opportunity to see products and news offered by 889 exhibitors from 40 countries.

At the Radaway booth, maintained in a modern style reminiscent of the Hypnotic line, we premiered the shower enclosure with gold profiles and fittings, new models from the Nes series with Factory and Frame glass as well as the most interesting engraving designs (designed by the winners of the competition „ASPiruj, kreuj, GRAweruj” open to students of the Academy of Fine Arts in Łódź). Teos and Kyntos shower trays, which can be made to measure, were also very popular.

By continuing to use the site, you agree to the use of cookies. more information